In times of hardship and suffering, it is easy to think that those things happen because God is absent, because He has abandoned or turned away. But that is not true. God is Lord of the good and bad, the mountains and valleys, springs and desserts. He is sovereign over all. Not only is He always in control, but He promises that He is near to those who are suffering, who call on Him, who cry out to Him. Suffering is not a sign of His absence, in fact it is in suffering that we feel Him most, if we call on Him. We have to recognize His presence and seek it. We also have to call on Him in truth. We have to follow Him. We have to be true to Him rather than following and serving ourselves until we “really” need Him. It is two-sided. He does His part without fail, but we must also do our part. We must be children of the truth. We know who a child’s father is by how the child looks and acts. No one would doubt the father of my son. We are called children of God, but do we look like Him? Do we act like Him? Draw near to God and He will draw near to you.
Posted by Evelyn Bray at 3:43:00 AM 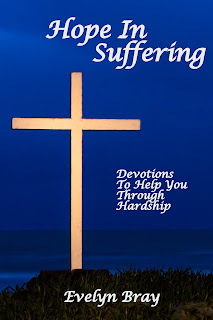